As your Senate representative to DC, we will SECURE the BORDER and LIMIT IMMIGRATION to those with merit:

We will Finish The Wall.  This is more than a 100% promise.  It is what America deserves.  Legal American citizens are 100% competent to perform every form of work needed by our economy.  We refuse the corrupt idea that illegal immigration is required to harvest our crops, mow our lawns, clean our homes or care for our children.  The wall stands as a concrete representation of our rejection of crime, corruption or capitulation.  Further, we happily welcome and embrace the best and brightest contributors from other lands in lawful immigration.  We are a nation of legal immigrants.  That is our past and we choose to reestablish it as our present and future.

The KEY FACTOR in immigration policy is choosing the right number of authorized immigrants for future years. To choose a lower number does not imply anything negative about the immigrants already here legally in this country. We’re talking about the future annual level of immigration that is best for both native-born U.S. citizens and foreign‐born U.S. citizens alike.
––– Roy Beck, NumbersUSA Founder & President
https://www.numbersusa.com/

Simply put, allowing the unchecked and unfettered immigration is an outright theft and giveaway of every American’s birthright by our politicians!

In 2015, Jeb Bush said, “Yes, they broke the law, but it’s not a felony. It’s an act of love, it’s an act of commitment to your family. I honestly think that that is a different kind of crime.” Still a crime, ¡Jebbie!

What an egregious and “holier-than-thou” insult to the majority of Americans. We are a generous nation, Americans has always led other nations in private donations, on a magnitude of order, in response to natural disasters around the world. Greatest generosity, notwithstanding does not mean one can just climb through our kitchen window, tracking mud, and help themselves to our refrigerator out of “love and commitment to their family”. Knock at the front door and ask for help! 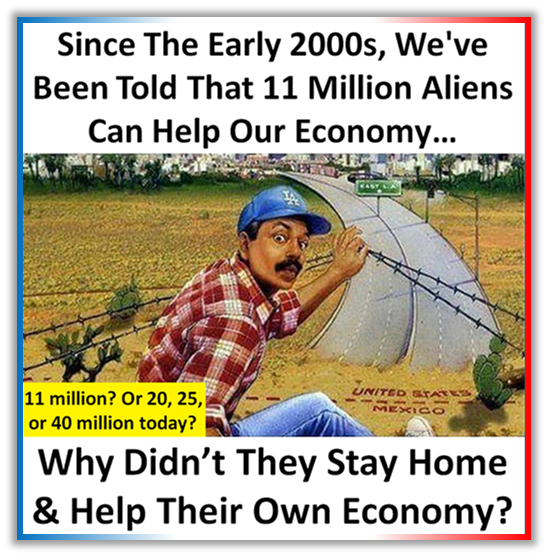 Out of control invasion by illegal aliens can never be a net benefit to Americans, but will be a drain on our national wealth. Open borders advocates, both Democrats and RINOs refused to give President Trump $5 billion to Build The Wall, yet will easily spend hundreds of billions of dollars annually to subsidize the healthcare, housing and general welfare of illegal aliens at the expense of all Americans.

This has a direct and debilitating effect on American jobs and security, as illegals compete for jobs, drive down wages, bring contagious diseases, steal identities among other disruptions. More importantly, when they sneak in, we are unable to vet them for contagious illness or whether one might be a common criminal, gang member, terrorist or worse whether the person is being trafficked. Finally, they are aided and abetted by certain states and organizations to dilute the vote of all Americans.

I don’t know about you, but I don’t recall Gov Kim Richards and Sen Joni Ernst seeking our consent to import hundreds of unvetted “Afghan refugees” into our State. What would they do if one or two turn out to be ISIS-K fanatics and commit an act of terror? Saying “oops, sorry” won’t cut it.

Returning to the Rule of Law