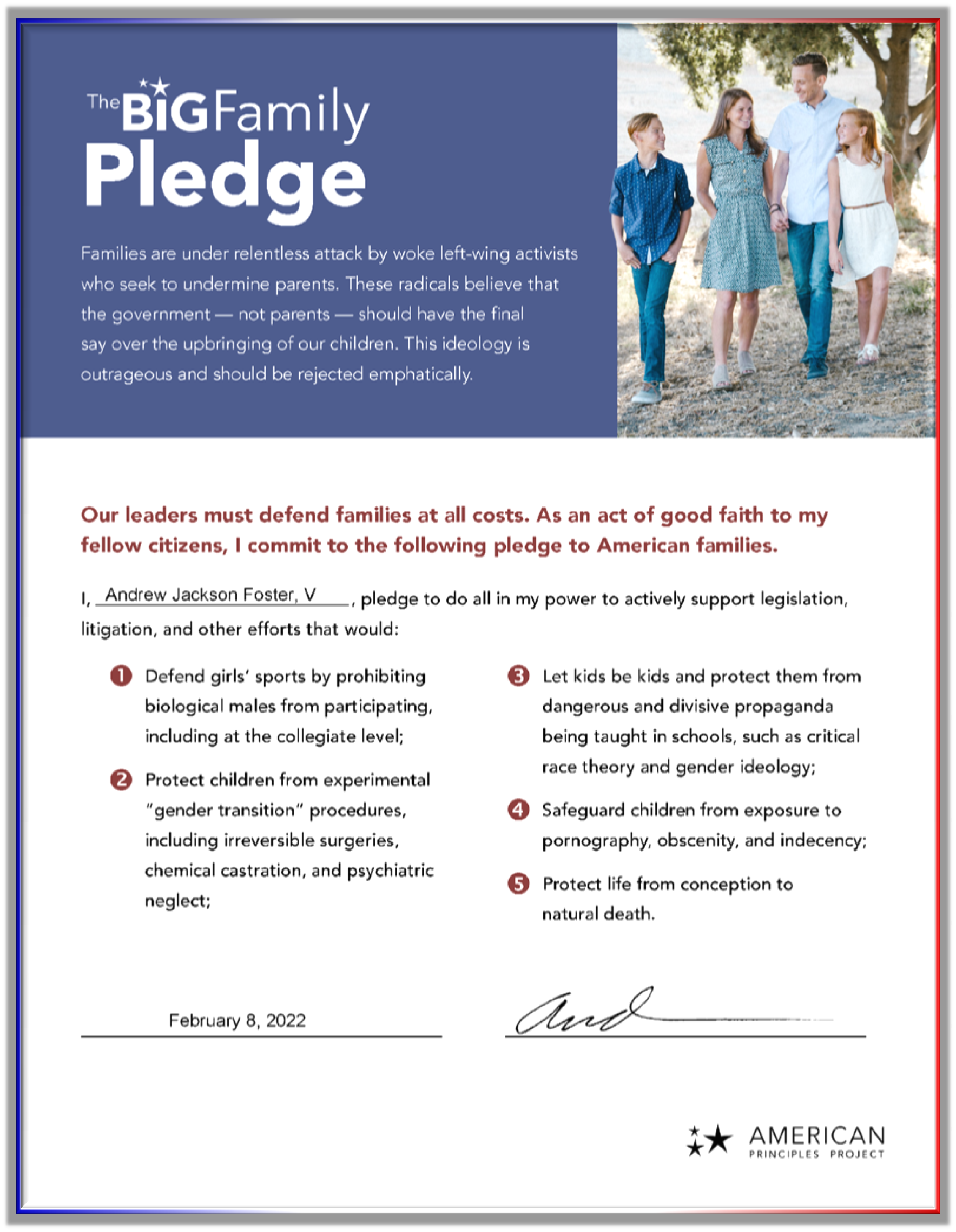 But whoever causes one of these little ones who believe in Me to sin, it would be better for him if a millstone were hung around his neck, and he were drowned in the depth of the sea.

The Pledge To American Families

On February 8, 2022, I signed the pledge to do all in my power to actively support legislation, litigation, and other efforts that would:

But wait, there’s more, which I cover under my Campaign Issues…

I also pledge to do all in my power to actively support legislation, litigation, and other efforts that would:

The reason why legislation to ban pornography from Iowa schools and the teaching of “alternative” sex lifestyles and preferences is in limbo is because of “Free Speech” and the logical fallacy behind this.

If conservatives act to ban certain books, 1) it is not “fair” to the others that may want the book(s), and 2) when the pornographers and groomers are in the majority, they can use the same precedent to turn tables on us.

What?  Where were these free speech advocates when books like Tom Sawyer & Huckleberry Finn, Uncle Tom’s Cabin and the Bible among others were removed from our schools’ curriculum and school libraries? Hypocrite much???  Either no book can be banned or removed, OR the community of We the People have the 9th & 10th Amendment right to determine what is acceptable or not.

To determine what may be made available to children or not. Whose children? YOUR children! YOUR grandchildren!

This fairly well-known statement came from the concurring opinion of Justice Potter Stewart in Jacobellis v. Ohio (1964).  This First Amendment case eventually came before the Supreme Court and dealt with the issue of obscenity and pornography. A movie theater had shown a movie called The Lovers which had a sex scene in it. The question was whether the theater could be legally sanctioned for showing pornographic material, but there was a problem—there was no precise legal definition for obscenity or pornography!

Every time a workable definition seemed to be within grasp, it would die the death of a thousand qualifications because of all the exceptions. The Supreme Court decisions would apply and modify the concept of contemporary “community standards,” arguably another arbitrary and useless legal euphemism. Nevertheless, in Jacobellis v. Ohio (1964), a majority of the Court decided (6-3) that government(s) could legally sanction against obscenity and pornography under the First Amendment, but that the film in question did not constitute pornography. Cleverly, Justice Stewart said,

“I shall not today attempt further to define the kinds of material I understand to be embraced within that shorthand description; and perhaps I could never succeed in intelligibly doing so. But I know it when I see it, and the motion picture involved in this case is not that.” (emphasis added)

While clever, such a statement undermines the natural rights ostensibly protected by the First Amendment because it arbitrarily restricts freedom of speech and expression to the ambiguous judgment call of government officials or judges.

The Constitution is NOT a Suicide Pact

The above opinion may be fine and dandy with regards to consenting adults, but in the context of exposure to minor children the argument falls flat. Let’s get one thing straight.  The Constitution is a framework document, in which We the People entrust the Federal government to do certain things on our behalf.  The operative word is FOR, as in “The Constitution FOR the united states”, not OF, as in “The Constitution OF the United States”.  In the former, the Constitution is the contract that the government is to abide by and failing that, We the People have the ‘common law/right‘ and ‘natural liberty‘ to abolish that government.  In the latter, the roles are reversed in the sense that it is the federal government that will dictate to us what we can or cannot do.

Common/Natural Law is perfectly encapsulated in our State Motto: “Our Liberties (from God) We Prize And Our Rights (from God) We Will Maintain”.  Our public servants, that’s what school boards, teachers and anyone else in the public sector are, our servants.  Servants do what we tell them or they can go find another job. Even so-called experts are still our servants.  They may make recommendations, but never, ever do they dictate to us what we must accept or reject.  End of discussion.

No one, absolutely no one, has the right of free speech to our children, let alone teach anything that goes against the parents’ will. Especially when such teachings will cause irreparable harm.  To recall another well-known statement, “Once you see it, you can’t unsee it“, let alone un-know it. A child’s innocence of adult subject matter MUST be protected.

And let’s face the ugly truth head on. What these Marxists teachers are trying to do is to disrupt the nuclear family, to confuse children and to groom them.  YES, GROOM OUR CHILDREN!!!  The Marxists will use any means to tear families apart, from Critical Race Theory, which any white child is inherently racist and their only absolution is to become part of a “protected” minority, i.e. pedophilia (targets of “Minor Attracted Persons”), queer, transgender, furry, bestiality, non-binary or mental illness among other agendas to fracture young minds and leave them ripe for rebellion against the “System”.

So how bad is it? Caution — Prepare to be enraged.  But by being enraged, you will fully understand the enemy we are up against. Part 1 of a 3 part series is ‘Groomer Schools 1: The Long Cultural Marxist History of Sex Education‘. Part 2 is ‘Groomer Schools 2: Queer Futurity and the Sexual Abuse of Your Children‘ and Part 3 is ‘Groomer Schools 3: The Creation of an American Red Guard‘. 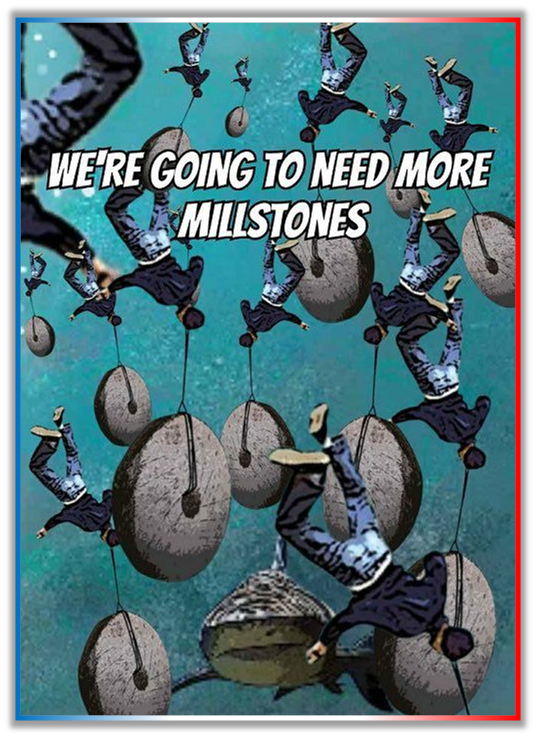 Once we wrap our minds around what the Marxist’s end-game is for our children, there is only one solution… We’re gonna need a lot of millstones for the harm these evildoers are doing to children.

And in case you’re not aware of it, no matter how shrill these progressives are in both parties get, We the People out number them.  So while they like to talk about “our democracy” as if by screaming louder and demonstrating violently gives them moral superiority over us, the truth is that we’re a constitutional republic.

YouTuber David Jose has been fighting government kidnapping of children by CPS for years. He was also instrumental in forcing AZ Senate Leader Karen Fann to authorize a full foresnic audit of Maricopa County by filing notices on her and the Senate. Here he discusses how parents can fight back on school indoctrination in ‘Why our Dumb Notices are Stupid to Smart People‘.

As your Senate representative to DC, I will fight to protect the innocence of our children and enable school choice for all American Families.