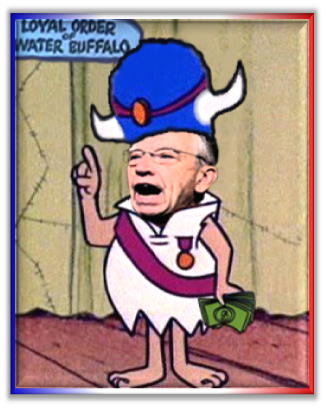 Is Chuck Grassley Iowa GOP’s Grand Pooh-Bah? Well, let’s follow the money and see where it takes us. According to Iowa Standard, Chuck’s Hawkeye PAC donated $848,000 to forty-nine State House Republicans who ended up endorsing him. $535,000 in the 2020 election cycle alone. I wonder if any of the money came from George Soros this time around?

Does all that generosity explain how his grandson, Pat Grassley, came to be Iowa Speaker of the House (SOH)? Another twist on pay for play, or did those 49ers get buffaloed into playing for pay? More on Pat later…

So who is donating all this money to Chuck? We all know the bulk comes from special interests.  Perhaps you may recall that he was insisting that his vote for the Infrastructure Bill was a good thing for Iowa.  “It’s going to pay for Bridges, Roads and Broadband.  Broadband? 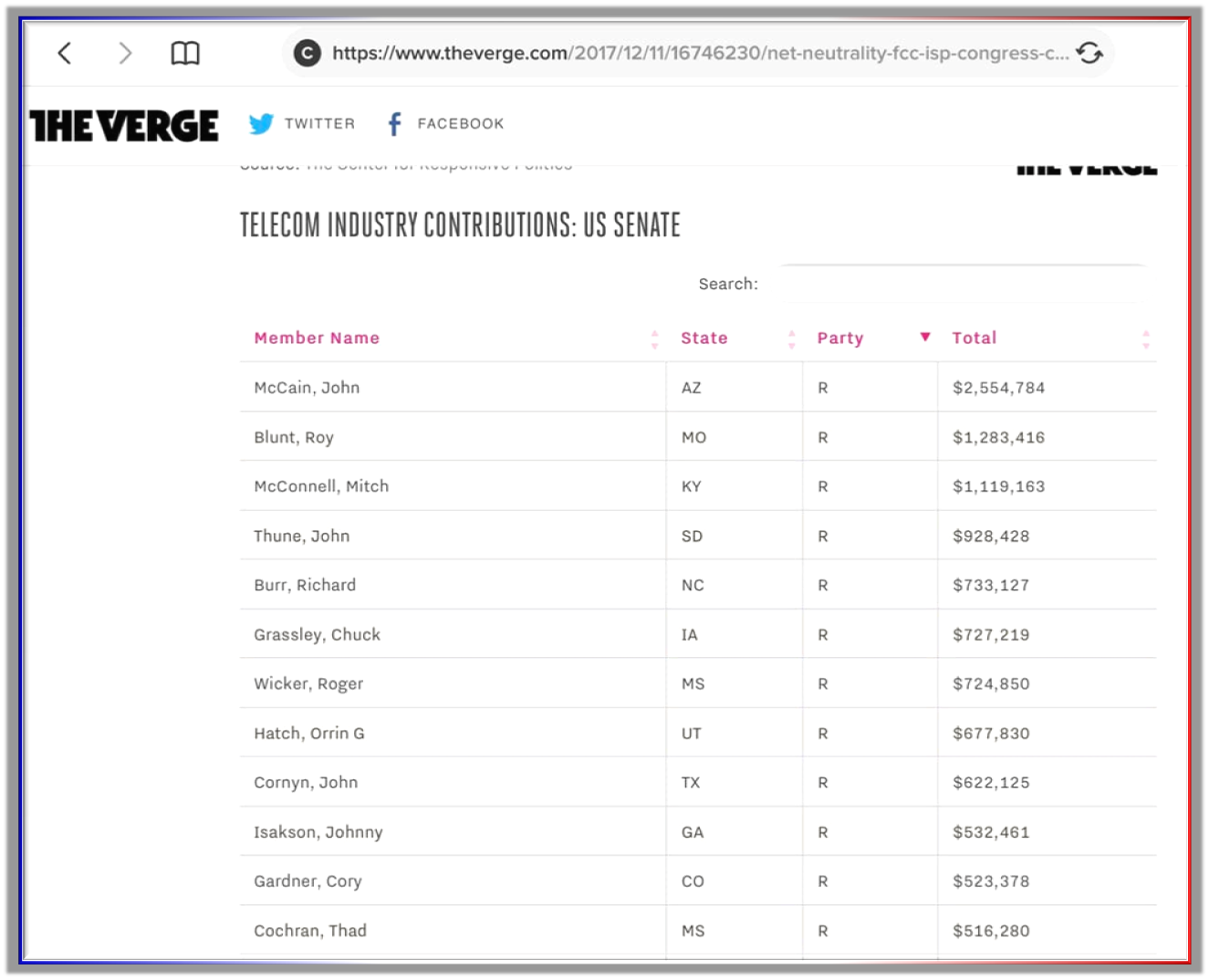 2016 Telecom Industry Contributions
(click on any image to enlarge)

Why, when it is practically ubiquitous everywhere? And for the rural areas where it doesn’t pay off to run hi-speed cables, Starlink is on the way. Then we find out it’s really about “digital equity” programs.  As much as Chuck collects from the telecoms industry, in every cycle, they naturally expect a return on their investment in him and his colleagues.  Needless to say, only 11% of the Infrastructure Bill will actually go to infrastructure, so whatever Iowa gets out of that, Iowans will be on the hook for 1000% of the cost to get it.  This is why subsidies are immoral, and technically unconstitutional, because our money is not theirs to give, even if they think the 16th Amendment makes it so. Politicians “investing” in things we don’t want, let alone need at the price we’re being forced to pay.

OK, PACs are gonna do what PACs do, which is why I’ll have nothing to do with them. As an America First candidate, I won’t be beholden to interests that are anything but America First.

Also this week, Business Insider did some digging and rated every member of Congress on their financial conflicts and transparency.

Dozens of federal lawmakers and at least 182 top congressional staffers are violating a federal conflict-of-interest law known as the STOCK Act. Others are failing to avoid clashes between their personal finances and public duties.

But when you have U.S. Speaker of House Nancy Pelosi defending you, that makes it OK, amirite?

Another writes; “Well it’s not exactly free and fair market trade when you’re investing in companies where from your position as a rep you can directly influence their market value through the very legislation you write up and pass into law.”  Enough of this rules for thee, none for me nonsense!

Back to SOH Pat Grassley.  For those of us calling, emailing and writing our elected to do something to protect us; the reason why we can’t seem to make headway is because the SOH blocks the bills from moving forward. Whether the topic is mask/vaxx mandates, rogue teachers & school boards, CRT, porn in schoolbooks, transgender bathrooms & sports, as well as to be more proactive to examine and verify that 2020 elections were above board in all Counties, we’re ignored. I’ve emailed everyone in DC & Des Moines at least twice about fixing 2020 to no avail, save two Representatives. Maybe they’re just sheep following Chuck when he declared there’s nothing wrong with our elections?  But if it is something that can be monetized, they’re all ears.

Case in point, how many of you are aware of Senate File 555 — A bill for an act relating to requirements and prohibitions relating to vaccines and immunizations, and providing civil remedies? This bill has 2 divisions or parts;

Division I relates to prohibitions against COVID-19 vaccine mandates by employers. Division I prohibits an employer from failing or refusing to hire, discharge, penalize, or otherwise discriminate against an employee with respect to compensation or the terms, conditions, or privileges of employment based on the employee’s COVID-19 vaccination history or the refusal of the employee to receive a COVID-19 vaccine or provide proof of immunity. An employee whose rights are violated under the division may bring an action against an employer in the district court in the county where the employer is located for injunctive relief, actual damages, admission or reinstatement of the employee with back pay plus 10 percent interest, or any other appropriate relief necessary to ensure compliance with the division of the bill.

How many people have lost their health and livelihoods as a result?

As the push for mandatory vaxx, or lose your job, heated up last September/October, Rep Jeff Shipley heard our cries and sent a letter demanding a Special Session to address the Medical Tyranny.  His letter starts off with:

The Iowa General Assembly has an immediate responsibility to settle the numerous medical and legal questions surrounding mandatory uptake of the COVID-19 public health countermeasure.

Suffice it to say, the Biden administration has failed to illustrate any compelling interest to justify the elimination of 1st and 4th amendment guaranteed Constitutional Liberty.

In fact, the federal government has irrevocably eroded the public trust, rendering compliance and enforcement with any national public health strategy impossible.

Repeated statements of a dubious nature by senior administration officials, such as CDC director Walensky’s remark, “so there’s actually hope, we don’t have data yet,” (Aug 24) reveals the federal government does not have a clear scientific basis from which to advocate for their policy

The response from the grandson of the Grand Pooh-Bah?  Crickets. Turning his back on Iowans because redistricting for fairness, to his friends across the aisle, was more important.

These politicians hate you, America.

And We the People wonder why we can’t seem to get any leverage with our legislature to write and pass the bills we demand, both in DC & Des Moines.  Could this be why?

From Forbes, regarding Grassley; “Since 2009 his campaign committee was given $45,000 from that group of seven. A spokesman for Grassley told Forbes via email that “political donations have no bearing on how Chairman Grassley runs the Finance Committee.” Grassley will “demand accountability and act in the interest of taxpayers,” he said.” That is from the, These Senators Received The Biggest Checks From Pharma Companies Testifying Tuesday, article posted February 2019; how much more has he collected from these genocidal criminals?

Scuttlebutt has it that Grassley, the Elder, is running again only to retire after a year or so, then Grassley, the Younger, can be appointed to keep the Pooh-Bah dynasty going. They think you’re stupid enough to re-elect the Younger after 4 or 5 years of him wallowing in the DC swamp. See how this works?

I’ll end with this list of donations from Pfizer to Iowan politicians, just remember who they are when you go to vote. If you have other examples, please feel free to provide the receipts in the comments below.

1 Timothy 6:10: For the love of money is the root of all evil: which while some coveted after, they have erred from the faith, and pierced themselves through with many sorrows. 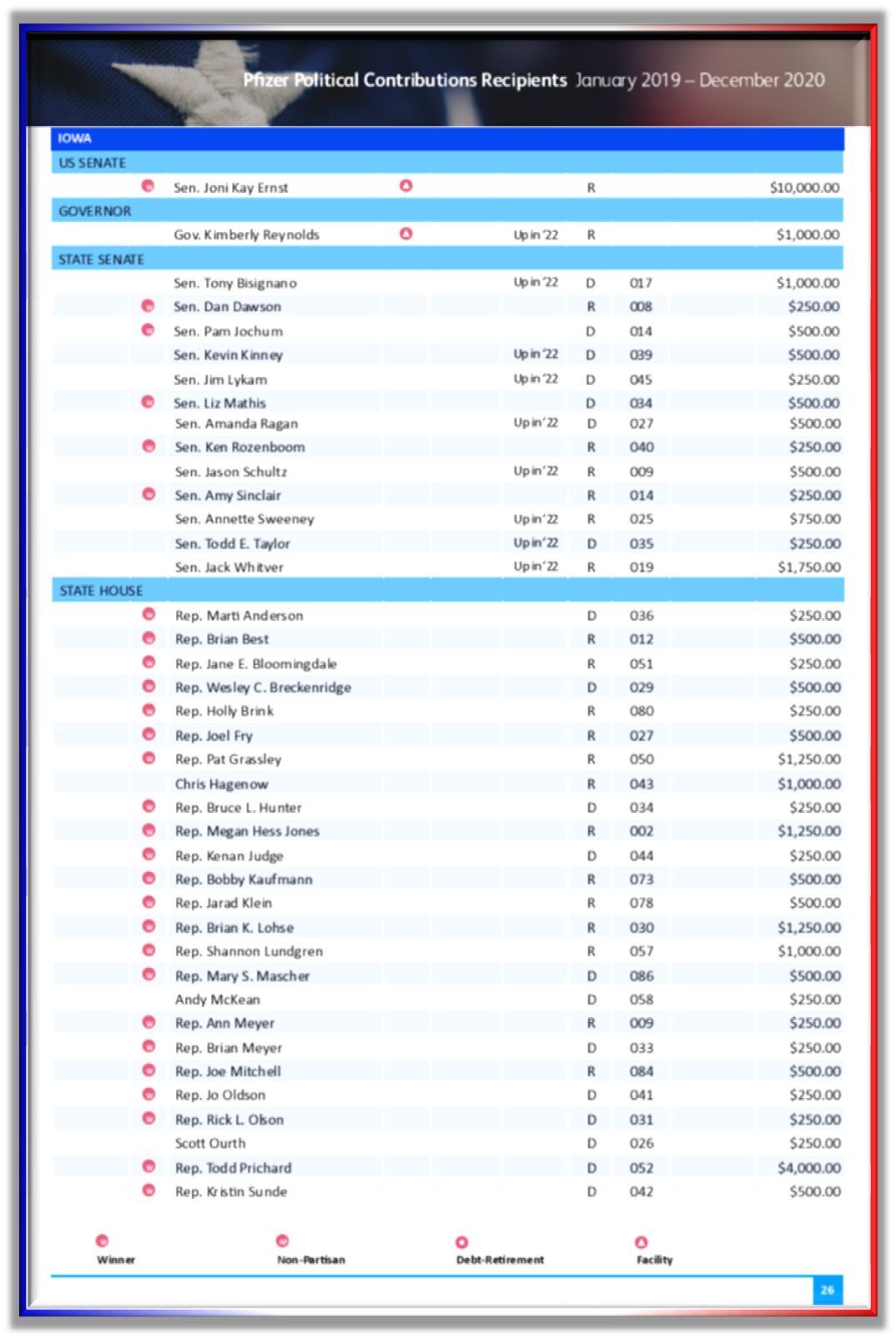 As your Senate representative to DC, I will fight to breakup the unholy alliance between Big Pharma, Insurance and Healthcare providers to restore the QUALITY OF HEALTHCARE.