Who is Ed Durr?

Ed ran using a few hundred dollars out of his own money, used social media and a ton of sweat equity going out and meeting people in donut shops etc and in the end, knocked out a powerful State Senator of New Jersey. We’re talking about blue state “Joisey“!   Ed also proved you don’t need slick campaign advisors, a big ad budget and mailers or even big campaign donations; when social media is a cheap way to get your America First message out and more power to you when it goes viral.

Make 2022 the year of the Great Upset. By replacing 1/3 (34 up for election—14 Democrats and 20 mostly RINOs) of the US Senate seats, all 435 seats in the US House, as well as 25 seats in the Iowa State Senate and all 100 seats in the State House!  And that’s not counting all the other State, County and Municipal offices that will be on the ballot on November 8, 2022.  But it can only happen if YOU either stand up and get on the primary ballot, or support an America First Patriot who does.

Easier said than done, right? In the past, you’d be absolutely right, until Donald J Trump came along and broke the machine all apart. Until then, only the selected were allowed to ascend the ranks in political office. The few that broke the pattern either had money (Ross Perot) or had fame & name recognition (Jesse Ventura). Others who threatened to break thru (Ron Paul, Pat Buchanan etc) were blocked and robbed in the primaries.

You may have heard it said that at least 90% are either corrupt or blackmailed. If so, why are we even debating about sending incumbents back to the Swamp (DC) or to the Sewer (Des Moines)?  Sending them back only re-enforces their bad behavior of screwing us again and again.  While they can’t stop what’s coming with the Great Awakening, they’re hoping to drag it out long enough to, in their minds, stay safe until they can somehow turn it back in their favor, even as their house of cards fall.

As George Carlin famously quipped; “It’s a big club, and you ain’t in it”. That was then, this is now and we don’t want to be a part of that club. Thanks to the Election 2020 fraud, the Covid-19 hoax, mask and vaxx mandates, we are awake — if we weren’t already — and we’re not going to take it anymore. ‘Tis the season to smash that club into a thousand pieces in 2022/2024, so be ready.

While I’m speaking mainly to Iowan America First Patriots, the same is applicable in most States. Iowa does not require an “filing fee” to get on the primary ballot, only a certain number of signed nomination petitions.

Some States do require the would be candidate to pay a filing fee in addition to a set number of petition signatures. This is a roadblock, put up by the uniparty to discourage unfunded challengers. Another obstacle is the “perjury” trap in which the Federal Election Commission (FEC) is used to derail certain targets from running. Specifically, the 1996 U.S. Senate race between Democrat Congressman Dick Durbin and conservative Republican State Rep. Al Salvi. While it took Al 4 years to clear his name, the damage was done. So it would behoove the candidate to avoid campaign contributions, if at all possible, or spend time and resources to vet the donors to make sure they are bona-fide donors.

Filing Period: Nomination papers must be filed during the filing period for the June 7, 2022, Primary Election. They cannot be filed before or after the following dates:

Federal and State candidate lists will be available and updated throughout the filing period. Contact your county auditor for information on county candidates.

The Secretary of State has prepared a 20-page 2022 Primary Election Candidate’s Guide that covers everything a candidate needs to know, which you can download here, be sure to read it all and make sure you understand it.

As mentioned, getting the Nomination Petition signed is the key to qualifying. I’ll break it down as follows, using Iowa as an example:

Petition signers must be; a citizen of the United States, a resident of Iowa and at least 18 years old by the time of the primary.  They must also be a resident of the same County as marked on the petition. For example, if the petition is marked as Scott County, only resident voters of Scott County may sign that petition, while residents of Polk sign a separate page of petitions marked for Polk and so on. See example below. 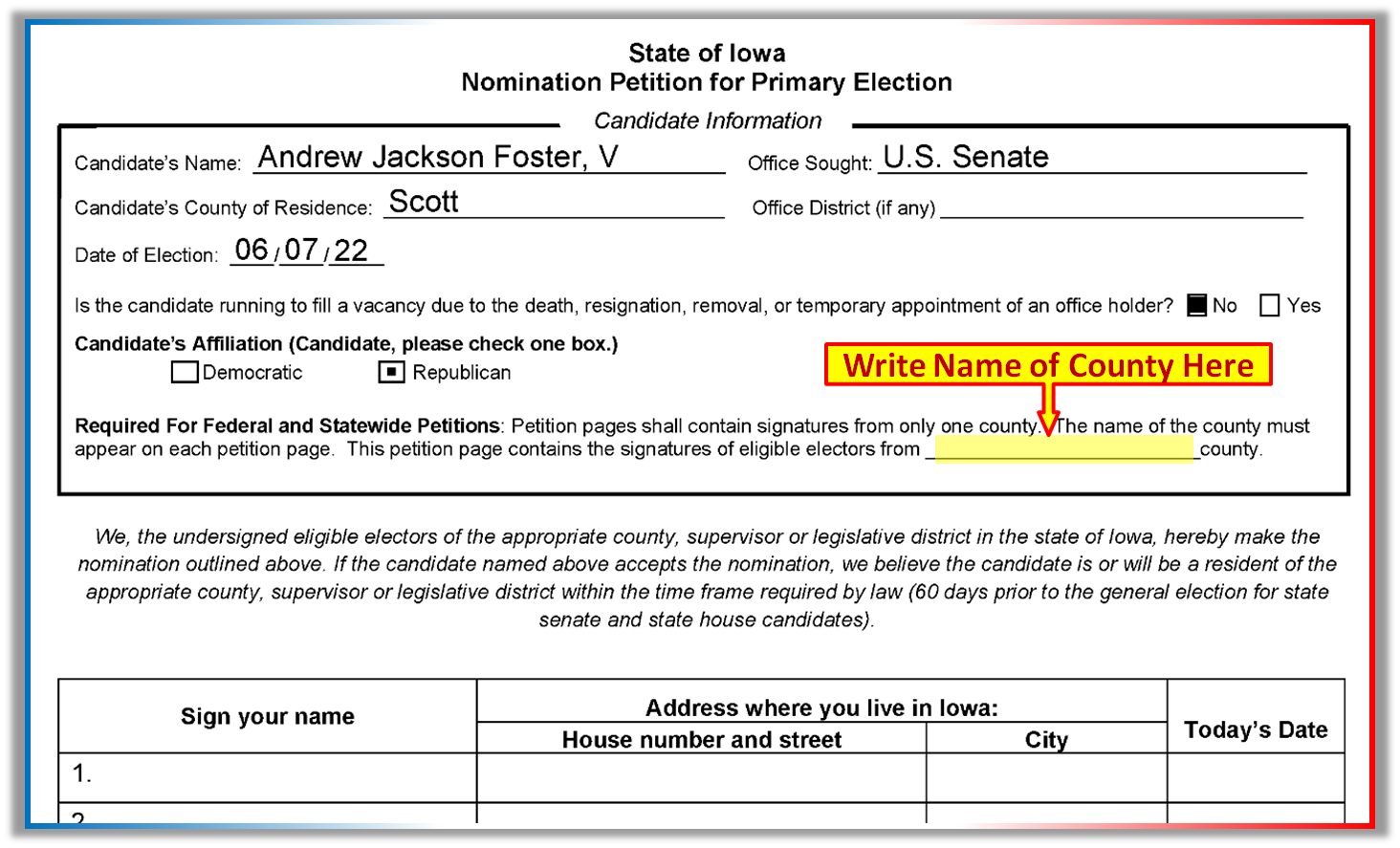 That’s basically all there is to it for getting on the primary ballot; collect more than enough signatures (shoot for at least 15% excess) then fill out  the Affidavit of Candidacy, then submit both together within the designated filing period and to the applicable office.

The Secretary of State has prepared a 20-page 2022 Primary Election Candidate’s Guide that covers the above as well as instructions for filling out the Affidavit of Candidacy, be sure to download it here http://sos.iowa.gov/elections/pdf/candidates/affidavit.pdf and carefully fill it out, notarize it and submit with your stack of nominating petitions.

Don’t be so sure about that, especially for 2022/2024. It’s our party, the party that was established in 1852 to end slavery because the Whigs wouldn’t do it. And now, the RINOs won’t heed the will of We The People, so it’s up to us to take the party back and free ourselves from fiscal bondage. From the SOS primary election guide:

If that’s not enough for you, listen to Donald J Trump in an interview with Jesse Ventura on 12/10/2014, just a few months before he came down the escalator.

I mentioned you need web presence via social media, but you wouldn’t want it tied directly to your personal social media, or perhaps you don’t have any.  For FEC & State of Iowa reporting purposes, you will need a campaign name, so whatever you chose, think ahead to something that can be used across all social media, as well as YouTube. Ideally 25 words or less.

You may also want to consider getting a free phone number from Google, yes that evil tech giant.  Use their tools against them…  Since most Social media require a phone number, it makes sense to get a free throwaway number once you’re done with it. https://voice.google.com is usable on any Android, Apple or even PC and you get a free number with your preferred area code.  It’s not a number you’re going to use for much except for signing up for the various social media, as well as getting a YouTube channel.

Social sites to consider joining; YouTube, Facebook, Twitter & Instagram, you need them because that’s where the “normies” are.  But also get accounts with CloutHub, Gab, Parler, Telegram and of course, Trump’s soon to be launched TruthSocial.com. Ideally, you want the same consistency across all platforms, same banner and profile image, same @user name and bio/profile which typically is your elevator pitch in 160 characters or less.

Another facet is the website. For smaller races, a simple domain for a few bucks and hosting plan and you get to create a few email addresses based on the domain you buy, then throw up a few pages. But you do want to steer visitors to signup for your newsletter and keep you social media pumping with your commentary on the news and events of the day, as well as forwarding or retweeting others when you agree with the message.

If you thought about running for office to help save America and put her first, what are you waiting for? 2022 could well turn out to be the year of the Great Upset, but only if you and other America First Patriots stand up like Ed Durr to give voters a real choice.

Don’t hesitate to contact me if you’re interested in running for office to restore our Liberties and maintain our Rights. And join our special America First Candidates group on Telegram to discuss all things related to campaigning and share lessons learned, tips and tricks.

As for web design and marketing assistance, contact Andy Metcalfe at Lion’s Roar Media https://lionsroar.media/. We designed this very website, so that it can be used as a template for others to use — simply replace the content with your own messaging. Andy has done work for others, including Brian Cates, AKA DrawAndStrike, a political columnist at https://riseofthenewmedia.com/.